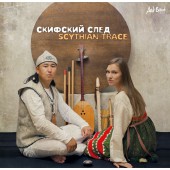 In «Scythian Trail», traditional melodies and Altai throat singing are combined with motifs of Slavic music, Russian poetry and modern electronic sound. Here you can often hear two songs in parallel, one in Altai, the second in Russian.

Image of the Scythians personifies the mythical ancient people, the progenitors of all people living on Earth today. It is a symbol of brotherhood, a reminder that we all have common roots, and our differences are beautiful in combination.

The Scythian Trace successfully debuted in the summer of 2017 at the WTO ETNO festival in Altai.