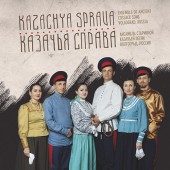 Ensemble of Ancient Cossack Song "Kazachya Sprava" performs songs of the Upper Don Cossacks. All members of ensemble have Upper Don Cossacks in his family, therefore the ensemble “Kazachya Sprava” has become the keeper and successor of the its amazing song tradition. A distinctive feature of the songs is the characteristic volatile performance of long songs, vocalization and uninterrupted breathing. This album includes 7 folk songs performed mainly by the choir, without accompaniment of musical instruments. There are songs in the genres of romance, military life, family life, wedding and fanny songs (ditties or “chastooshkas”).

The name of the ensemble also has a deep meaning: “Sprava of the Cossacks is not only military uniforms, horse and weapons, it is in general a national costume, but even wider is Cossack morality, household and economic structure, the whole complex of objects and customs, surrounding the Cossack”, wrote the famous Cossack, writer and musician Boris Almazov.

The Cossacks, is a social community formed in the 14-15 centuries in the southern regions of the Russian Empire, in the lower reaches of the Dnieper, Don, Volga rivers. From the point of view of nationality, among Cossacks one can meet people of different nationalities, since Russians, Ukrainians, Poles, Caucasians, Tatars and many other. The male population of the Cossack communities was mainly engaged in military affairs, therefore in song folklore a large place is given to military songs and the theme of military service.