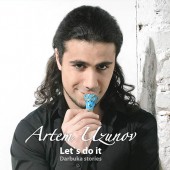 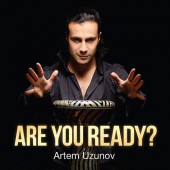 Artem Uzunov is a talented and charismatic musician, percussionist. Its main weapon is the Darbuka, the ancient percussion instrument of the Middle East. With the help of darbuka and unsurpassed artistry, Artem Uzunov won the hearts of many connoisseurs of oriental rhythms and dances. Under his music dancing the best dancer of the world, and his performances on stage simply has no equal! Artem is a frequent and welcome guest in the world of festivals and competitions devoted to oriental dances and bellydance.

In his music, Artem Uzunov often experiments, mixing traditional bellydance rhythms with electronic, club pads and popular melodies from classics to rock. Thus, the global expansion of stylistic boundaries is taking place - we easily find our way into the world of exotic, oriental percussion and plunge into the sea of unrestrained drum rhythms, dancing surrounded by the fountains of sound pulsating in time with the music.

In 2017, Artem Uzunov personally developed the first professional educating application for mobile devices, devoted to the Middle Eastern rhythms. A wonderful assistant for both professional percussionists and dancers, and the beginners.

Darbuka Rhythms is:
- visual description of notes for visibility and easiness of understanding.
- 18 rhythms in 101 variations with the detailed description of each rhythm and instrument.
- rhythm player with possibility of playback speed management and combination of the instruments sounds.
- creation of compositions of various rhythms and their variations with the set beat and number of bars.
- training of skills related to rhythms identification by ear. 2 modes, 3 difficulty levels and 160 tasks.
- possibility to take on the role of a percussionist and play the drums.

The app from Artem Uzunov - Darbuka Rhythms you can download at AppStore and Google Play:

CD album of Artem Uzunov "Let`s do it - Darbuka stories", was released in 2014 on our label Sketis Music, and will be of interest for everyone who loves percussion music, rhythms of drums and darbuka. The idea of the album - darbuka, as a solo instrument in combination with completely different styles.

Most of the tracks on the album is music for bellydance, but there is a composition in which traditional arabic rhythms on darbuka combined with club house, rock, brazilian carnival samba and spanish motifs, mysticism and the armenian duduk, and finally with the classics ("Four Seasons" by Vivaldi ).

Compare album can be with such well-known as a dance album «Harem II - Time Of Rhythm - The Best of Turkish Bellydance», as well as the works of Safri Duo, for example (in Arabic theme) Issam Houshan & Hossam Ramzy.